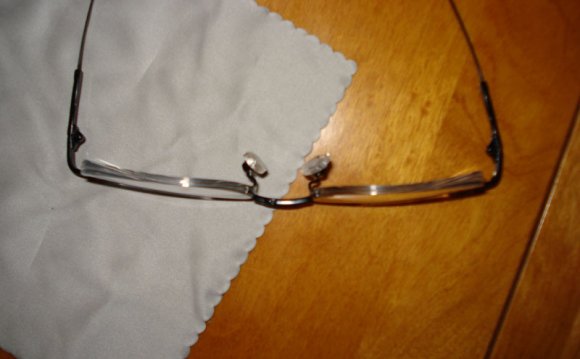 An order was placed for glasses from Zenni. EyeglassRetailerReviews received countless emails from many Zenni customers, many of which were having issues with Zenni. It was therefore decided that the March purchase would be from them, partly because it's been long overdue, and partly to see if this order faced any of the same issues others were having. A basic pair of $8.00 semi-rimless glasses were ordered, with the AR coating chosen as an option for an additional $4.95. Shipping to Canada was $6.95, bringing the grand total to $19.90 USD.

An email was received indicating the glasses had shipped, and included a Hong Kong Post tracking number. Note that the FAQ on Zenni's site states the following:
"In most instances, a single vision pair of glasses will be delivered in approximately ten days after the placement of the order. If you're ordering single vision, and you're on the West Coast of the U.S., the period may be shorter. Most non-domestic single vision orders arrive in approximately ten days of placement of the order, and are shipped directly from our overseas lab via Hong Kong Post."

Now, maybe I'm bad at math here, but I have no idea how Zenni expects people to receive their glasses in 10 days, when the glasses aren't even shipped for 16 days. Maybe they have a "Back to the Future" car that can go back in time 6 days that they simply forgot to use. Maybe they're lying about their delivery time. Or maybe I just got unlucky.

Yes, I jest about it (it's better than getting angry), and normally I wouldn't be so quick to throw punches. After all, there can be a lot of legitimate reasons for having delays. For example, if the glasses are crafted and fail inspection, they may have to be recrafted. I'm usually apt to giving the retailer the benefit of the doubt. However, a large number of the emails received by EyeglassRetailerReviews have been in regards to long shipping times – quite often up to a month, and rarely less than 2 weeks. I tend to get the impression that long crafting times by Zenni are now common practice, and that the claim of "ten days" is grossly inaccurate and misleading to customers.

The packaging was a basic bubblewrap envelope. Inside was a plastic clamshell case, with the glasses inside, wrapped in a microfibre cloth.

There was a little fluff/debris on the lenses, but it rinsed off easily. The frames were pretty basic, but seemed quite sturdy. The arms squeezed in a little bit (which you can see in the angle on the picture above). At first it appeared as though they may have to be adjusted, but most of the arm towards the rear is thin and flexes well enough to fit onto a larger head without having to make bends/adjustments. The UV/AR coating had a purple/green reflection to it depending on the light source and angle.

As mentioned, the frames were very sturdy. Semi-rimless (and rimless) glasses have a "wire" keeping the lenses tightly in place, and the quality of the work here was excellent – while you can't see it in the images, it was nice and tight, and the groove was well done.

Putting on the glasses, they seem to be optically correct.

An examination of the lenses themselves showed a couple very minor scratches or scuffs (difficult to determine which) in the left lens. Note that it took a good few minutes of examination to catch this, and it's not something that would likely ever be noticed normally (or affect the vision). Very minor, but worth a mention. Otherwise the lenses were flawless. A picture wasn't taken of it because it would probably take about an hour just to find a light source at an angle that the camera would actually get properly – that's how minor it really was.

Of larger concern was the AR (anti reflective) coating. It seemed to be rather poor, and light reflected from all over the place which was visibly quite annoying. Normally I would have suspected it wasn't even there, but with the purple/greenish reflection I have to assume one was applied. It just doesn't do it's job terribly well.

Another issue with the AR coating is that it also doesn't cope well with hot water – it cracks. One second under hot tap water, and the cracking instantly started. I ran both lenses under a few more seconds of hot tap water and this was the result:
do NOT use hot water to clean the lenses, or this will result (only visible in specific light conditions which were created for the photos)

The "cracking" is something of a growing concern, and it's not limited to Zenni's coatings – it involves some other retailers as well. Really, there are plenty of times glasses can be subjected to hot water (heck, ever been in a hot tub?), and some retailers seem to be cheaping out on the quality of the coating. Really, this probably won't affect most people, particularly if they're careful. For those it does affect, they certainly won't be pleased.