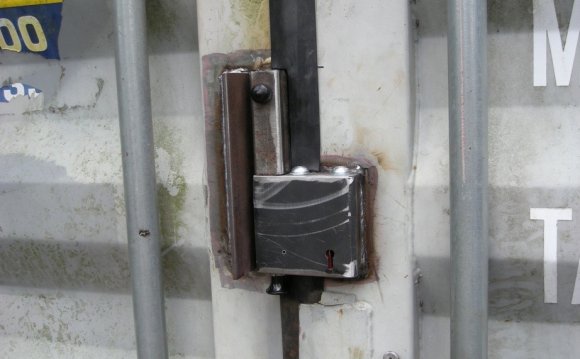 Have you ever heard of a twistlock? Unless you're a stevedore, probably not. Yet this little mechanism is what makes it possible to stack shipping containers onto cargo ships larger than city blocks—enabling a global trade network that brought most of your belongings to your doorstep. And we have a relatively little-known Californian mechanical engineer to thank for it.

Our belongings are the result of a vast, global constellation of suppliers, all of whom depend on a system that only emerged in the 1950s. As Rose George explained in her recent book, Ninety Percent of Everything: Inside Shipping, the Invisible Industry That Puts Clothes on Your Back, Gas in Your Car, and Food on Your Plate, this system is responsible for transporting 90 percent of everything we own.

Your phone, your clothes, your books, your furniture, your gas, your food: All of it is packed into steel containers and hauled through one of many hugely busy shipping lanes that truss the globe.

The person responsible for building the technology was a guy named Keith Tantlinger. Tantlinger was a lifelong Californian who spent World War II designing the tools used to build B-17 bombers.

After the war, Tantlinger stopped designing planes and started designing technology—starting, in the 1950s, with the idea of the shipping container. Before Tantlinger came along, the shipments were made in all sorts of different loads, and each one had to be unloaded at its destination port slowly, carefully, and very inefficiently. Tantlinger had a better idea: Standardize a crate that could be lifted from boat to truck in one fell swoop.

But a standardized container was just the vessel. The really important bit was how to stack it. After all, to ship increasingly huge volumes of stuff, shipping companies needed to cram more and more containers onto a single ship. Our appetite for things was far outpacing the race to build bigger cargo ships, so they would have to stack—and stack quickly.

So, in the mid-1960s, Tantlinger invented a brilliantly simple and nearly indestructible mechanism that quickly and safely latched each container to the next. It was called a twistlock, and it looked like this:

It's basically the same idea as your average computer lock—except strong enough to stabilize massive loads. A two-part connector made up of a "female" end is built into every corner of a shipping container, and a "male" end is what connects between female units.

The male piece is a simple piece of metal—often pointed—that is inserted into the corner whole and then rotated by 90 degrees, locking it into place. Here's Tantlinger's patent, from 1967:

It was a tiny idea, but it was massively important. With it, containers could be stacked without lateral cross-bracing, dozens per hour, by the massive boom derricks you still see in ports today:

Though some need human labor to lock into place, these days, companies like MacGregor make fully automatized versions that latch into place on their own. So our ports, which once ran thanks to thousands of human stevedores, are increasingly automated:

The change in how our ports are run is bigger than you'd think. In fact, there's a good chance it's affected you, if you live in a coastal city. As Tantlinger's device caught on and ports began to shrink in the 1970s and 80s, the riversides that once bustled with life descended into a deep blight.

Marc Levinson, the author of The Box: How the Shipping Container Made the World Smaller and the World Economy Bigger, explains how containers set in motion a butterfly effect across cities worldwide: