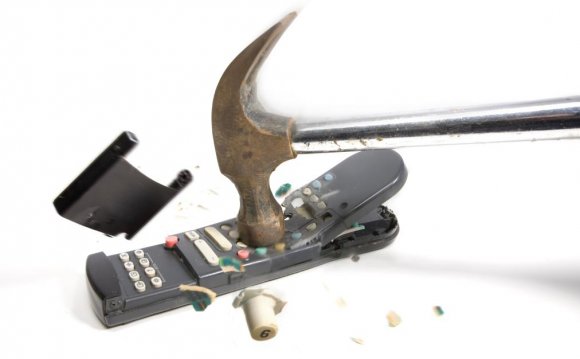 Time Warner Cable may be the most hated brand in Los Angeles. Among its other misdeeds, the company is now holding the Dodgers hostage, blacking out games for 70 percent of TV viewers until its carriage fee demands are met.

But it is also a monopolist. And so, as with an abusive spouse, it's hard for subscribers to leave.

For me, the moment of decision came in the second quarter of the Super Bowl, when the picture froze. Most customers were able to switch to the HD channel. But those who, like me, still had an analog television were out of luck. The most-watched show in TV history was blacked out for more than an hour.

I was an ambivalent Time Warner subscriber to begin with. A few years ago, I canceled basic cable and opted for the "starter" package, which includes the broadcast channels plus a couple random things like C-SPAN and local government access.

Instead of continuing to pay a monthly cable bill, I could have bought a digital converter and gotten most of the same channels over the air. However, the monthly bill was only $14, so it seemed like a minor thing. In hindsight it was stupid, and it became increasingly stupid as the cable bill increased, eventually doubling to $28.

Yes, I was paying $28 per month, or $400 per year including taxes and fees, for service that was available for free over the broadcast airwaves, plus C-SPAN. That's a lot to pay for the right to watch "Prime Minister's Questions."

For years, canceling cable had been lingering in the back of my mind as something I should get around to doing, in the way that one thinks about eventually getting a living will. But it was easy to put off.

Until the Super Bowl.

When the screen froze, my initial reaction was bafflement, then anger, then the perverse kind of glee that often accompanies disaster. I was not happy about it, but in a way, it was the wake-up call I needed.

Obviously it was my fault for having an old-fashioned TV. No one to blame there but me. It was also my fault for depending on Time Warner Cable, of all companies, to deliver reliable service in the clutch. I didn't even have a backup plan - no antenna, nothing. Again, hard to blame Time Warner for that.

Then the company, in a gesture of half-hearted apology, sent me a $5 Target gift card. This is what Time Warner Cable thinks of its customers. "Go buy yourself something special, " the company might as well have said. "You deserve it."

It was time to cut the cord. But that proved not to be easy.

While customers can order service online, to cancel it they have to pick up the phone and deal with customer service.

"Why are you canceling your service?" he asks.

"OK, well let me ask you some questions. What would you say you use your TV service for?"

"I'm not answering that, " I say, too embarrassed to admit to paying $400 a year to watch Brookings panels on C-SPAN.

He is momentarily thrown, but recovers and asks why I won't help him help me get better service.

"Because I just want to cancel the service, " I say.

"I'm not answering that either. I just want to cancel the TV service."

Then comes a blizzard of pricing information. He attempts to convince me that canceling my TV service will end up costing me more because my Internet service will be unbundled.

This may even be true, because cable pricing is so opaque that who can really tell. Though he's pushing it hard enough to suggest I should stick to my guns.

"I'll just say this one more time. I'd like to cancel my TV service." I end up saying it two more times - seven total - before he finally goes ahead and cancels the service.

But I'm not done.

They won't stop billing me until I return the cable box. Because I want to stop paying (or maybe start paying my new higher rate?) as soon as possible, I leave work early and head over to the Time Warner Cable office in Culver City.

I had naively expected to be able to drop off the cable box fairly quickly - as had the other 25 people sitting glumly next to their hardware. I take a number: 38. They call number 14. This is going to take a while.

Each minute that goes by leaves me a minute closer to my grave. It's after 5 p.m., and the Time Warner office closes at 6. I consider just leaving my cable box in the middle of the floor and walking out. But that would probably just make the situation worse somehow.

A woman is demanding to see a supervisor.

"She just got here, " another customer grumbles. "I've been here 45 minutes."

I pick up my cable box and take it home, thoroughly defeated.

I return the next day to find the place virtually empty. I take a number and sit down on a couch in front of a big-screen TV. It's tuned to SportsNet LA, the Dodgers new exclusive TV carrier, available only to Time Warner Cable subscribers.

Greinke is pitching and Scully is at the microphone. It's a beautiful day in Arizona, one of the last days of spring training, and the image is crystal clear. You can see each blade of grass. Strike. Ball.

And then my number is called. I hand over my cable box, sign an extremely long receipt, in which I agree to settle our disputes in arbitration, and walk out.

Now, with a new TV and an MLB.tv subscription, I can watch day-old Dodger broadcasts over the Internet. Most of the time it works OK, but whenever there is a buffering glitch, I can still curse Time Warner Cable.